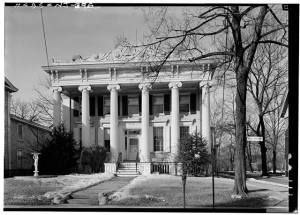 The law firm’s founding partner, George H. Large, established the practice in 1882. His son, George Knowles Large, joined the firm in the early 1900s, and in 1935 served as Special Assistant Prosecutor during the world-famous Lindbergh baby kidnapping trial in Flemington, NJ.

During the trial, Col. Lindbergh would often stay at Large’s country estate off Old Croton Road just outside Flemington, which is now part of the Uplands Reserve hiking and recreation area.

In 1940, Large’s nephew and Columbia Law School graduate Edwin Large joined the practice, later serving as president of the Hunterdon County Bar Association and as Hunterdon County Counsel, as well as registered agent for several national corporations. In circa 1958, partners Robert Danziger (deceased) and Scott Scammell (deceased) joined the firm, giving it its present name which continues as a legacy to its long history in Hunterdon County.

Scott Bullock took over management of the law firm upon the retirement of partner John F. Danziger, who retired from the private practice of law in 2012. Born and raised in Flemington, Scott is a graduate of West Virginia University, where he was Top Scholar in the journalism program, and won numerous undergraduate awards for his creative and nonfiction writing.

At Seton Hall Law School in Newark, NJ, Scott completed an Honors Internship program at the office of the Essex County Counsel in Newark, NJ, and worked thereafter as a trial attorney at one of New York City’s oldest and busiest personal injury firms. Scott is a member of both the New Jersey and New York state bars.

We recently moved to 7 Maple Avenue in Flemington NJ, corner of Maple Ave and Spring Street. Parking is available free of charge in the rear lot behind our office. Call us today at 908-782-5313 to discuss your legal matter, or stop in for a free consultation.